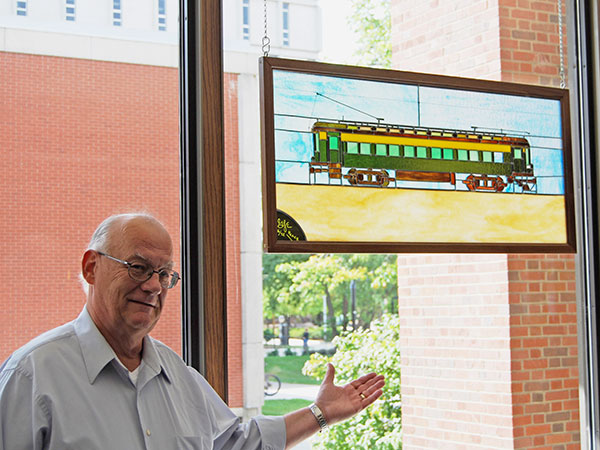 The UWM Libraries are a crucible of creation, bringing together people and ideas, and sparking new knowledge that is disseminated through articles, papers, presentations, books.

Sometimes, art is fostered here as well, but perhaps only once in the manner that the Libraries “inspired” Gary Elshoff.

Elshoff was a student worker at the circulation desk in the early 1970s as he was finishing his degree in Business Administration. To supplement his wages, he displayed and sold his own small stained-glass “sun catchers” at the desk during his shift.

One day in 1972, William Roselle, then the Director of the Libraries, having noticed Elshoff’s enterprise, called him into his office and asked for compensation: a bigger stained glass piece for the library in return for Elshoff’s use of the circulation desk as a sales display.

“At the time,” he says, “I was involved with a group that was chronicling the history of Milwaukee’s streetcar and interurban railroad transit system. “I chose as the subject of my work a representation of an interurban coach, in which my grandfather had at one time been a motorman.”

As part of the history project, Elshoff had discovered the Waukesha gravel pit where the cars had been scrapped in the 1940s and 50s, and collected shards of stained glass, the only remnant of the cars left.

He was able to work a few pieces of the old glass—amber rectangles—into his design.

“So the stained glass window I made,” Elshoff says, relishing its poetic recycling, “is of an interurban coach once operated by my grandfather and contains the remnants of a car that was originally constructed in 1910 and scrapped in 1950.”

His piece hung in the West Wing third floor reading room of the library for many years. Elshoff recently offered to refurbish the stained glass. He returned the artwork, cleaned and mended, this past fall and it has been re-hung in a window on the south side of the Daniel M. Soref Learning Commons, now aglow when the sun pours through it.

Elshoff notes that the library piece was the precursor to a decades-long business designing and fabricating custom stained glass windows, mostly of aviation themes. Images of his work can be found on his website www.flyingcolorsglass.com.