Seeing the world through aviation-colored glasses 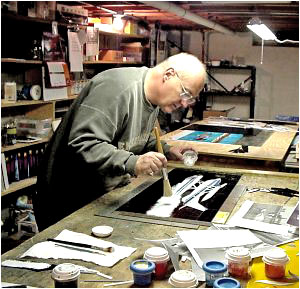 Turn a plain window into a PLANE WINDOW!” is Gary Elshoff’s slogan for his business called Flying Colors Glass LLC.

“In the aviation community, I’m just known as the glass guy,” Elshoff said. Elshoff is a self-taught artisan who cre­ates aviation-theme stained glass. Working out of his Grafton home, Elshoff has been open for business for about 15 years. “It used to be called the basement, but now it’s called the studio,” he said. His interest in aviation came from his son Jeffrey’s passion for airplanes. That is where he found a niche market interested in that type of art.

According to Elshoff, more people attend air shows every year than the combined attendance of all NFL football and Major League Baseball games.

“A lot of people like airplanes,” Elshoff said. He developed a desire to learn stained glass art as a senior in high school when he found a Tiffany-style lamp in his grandfather’s basement. When he attended the University of Wisconsin­ Milwaukee, he sold suncatchers he created while he worked in the library. One day, after watching Elshoff, the president of the library asked if he could make some­thing for the library.

“So that’s where I turned a corner and became a win­dow artist,” Elshoff said.

His first project was of a Milwaukee Electric Interurban car. This window panel is still hung in the Golda Meir Library. Today, Elshoff’s work can be found throughout the United States as well as Europe and Asia, including the San Diego Air & Space Museum, the Macon County Airport in North Carolina, the Indiana Military Museum and the West Bend Airport.

Elshoff is the only stained glass artist member of the American Society of Aviation Artists.

“My work will be an everlasting tribute to someone’s interest in aviation,” Elshoff said.

Elshoff dedicates his work to his late father, Gerhard Elshoff. His father’s last words to him were, “Whatever you do, do it well,” he said.