Article in the Winter, 2014 issue of the AERO-BRUSH, a publication of the American Society of Aviation Artists 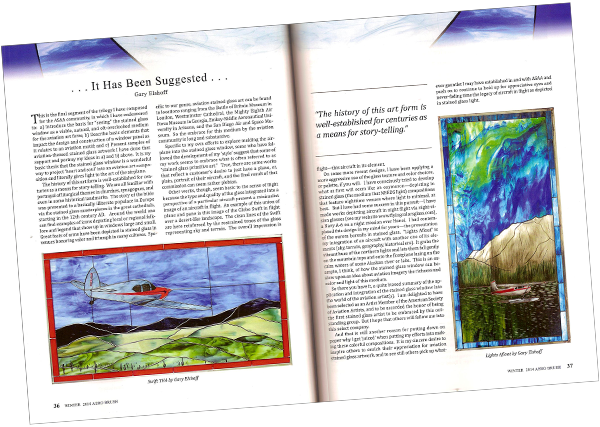 Article in the Winter, 2014 issue of the
AERO-BRUSH, a publication of the American Society of Aviation Artists

Read the full article below.

This is the final segment of the trilogy I have composed for the ASAA community in which I have endeavored to: (A) Introduce the basis for “seeing” the stained glass window as a viable, natural, and oft-overlooked medium for the aviation art form; (B) Describe basic elements that impact the design and construction of a window panel as it relates to an aviation motif; and (C) Present samples of aviation-themed stained glass artwork I have done that give resonance to support and portray my ideas in (A) and (B) above.

It is my basic thesis that the stained glass window is a wonderful way to project ‘heart and soul’ into an aviation art composition and literally gives light to the art of the airplane.

The history of this art form is well-established for centuries as a means for story-telling. We are all familiar with portrayal of liturgical themes in churches, synagogues, and even in some historical landmarks. The story of the bible was presented to a basically illiterate populace in Europe via the stained glass masterpieces in the great cathedrals, starting in the 12th century AD. Around the world one can find examples of icons depicting local or regional folklore and legend that show up in windows large and small. Great feats of arms have been depicted in stained glass in venues honoring valor and triumph in many cultures. Specific to our genre, aviation stained glass art can be found in locations ranging from the Battle of Britain Museum in London, Westminster Cathedral, the Mighty Eighth Air Force Museum in Georgia, Embry-Riddle Aeronautical University in Arizona, the San Diego Air and Space Museum, etc. So the embrace of and by the aviation community for this medium is long and substantive.

Specific to my own efforts to explore the melding of the airplane into the stained glass window, it has been suggested by some who have followed the development of my ‘style’ to point out that some of my work seems to embrace what usually comes out as “stained glass primitive art.” True, there are some works that reflect a customer’s desire to just have a plane, er, plain, portrait of their aircraft, and the final result of that commission can seem rather plebian. 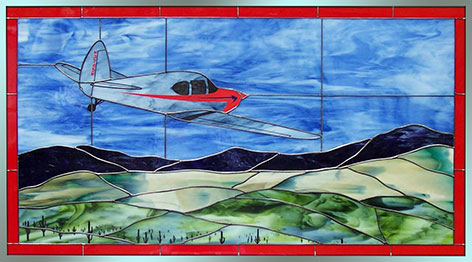 Others, though, seem basic to the sense of flight because of the type and quality of the glass integrated into a perspective of a particular aircraft that gives a minimalist image of an aircraft in flight. An example of this union of plane and pane is the image (right) of the Globe Swift in flight over a desert-like landscape. The clean lines of the Swift are here reinforced by the restrained tones of the glass representing sky and terrain. The overall impression is flight – this aircraft in its element.

Going in another, more recent, direction, I have been working into some designs a more aggressive use of the glass texture and color choices, or palette, if you will. I have consciously tried to develop what at first will seem like an oxymoron – depicting in stained glass (the medium that NEEDS light) compositions that feature night-time venues where light is minimal, at best. But I have had some success in this pursuit – I have made works depicting aircraft in night flight via night vision glasses (see my website www.flyingcolorsglass.com), an Navy A6 in night mission over Hanoi, and the one I contemplated in my mind for years – the presentation of the aurora borealis in stained glass.

See “Lights Afloat” (left) as my integration of an aircraft in another one of its elements (sky, terrain, geography, historical ere) is captured in a work that grabs the vibrant hues of the northern lights and lets them fall gently on the mountain tops and then onto the floatplane lazing on the calm waters of some Alaskan river or lake. This is an example, I think, of how the stained glass window can bestow upon an idea about aviation imagery the richness and color and light of this medium.

So there you have it, a quite biased summary of the application and integration of the stained glass window into the world of the aviation artist(s). As stated before, I am delighted to have been selected as an Artist Member of the American Society of Aviation Artists, and to be accorded the honor of being the first stained glass artist to be embraced by this outstanding group. But I hope that others will follow me into this select company.

And that is still another reason for putting down on paper why I get ‘juiced’ when putting my efforts into making these colorful compositions. It is my sincere desire to inspire others to enrich their appreciation for aviation stained glass artwork, and to see still others pick up whatever gauntlet I may have established in and with ASAA and push on to continue to hold up for appreciative eyes and never-fading time the legacy of aircraft in flight as depicted in stained glass light.